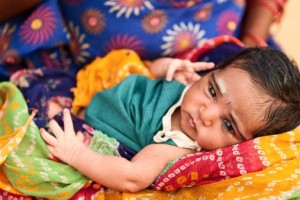 Manisha is a beautiful baby girl who is alive today because a GenderSave staff member brought hope to Manisha’s mother.  Being a girl nearly cost Manisha her life until her mother was assured that GenderSave would help.  But in saving Manisha’s life, a new problem developed.  Manisha’s parents rejected and abandoned her.  She was an unwanted burden to them. Now Manisha is an orphan.

And she isn’t alone.  Other infants share in Manisha’s plight, abandoned, rejected, discarded for being a girl. But Manisha and the other babies like her aren’t without hope.  Through GenderSave’s intervention, these orphaned girls have a chance at life.

Each day, another mother seeking help arrives at GenderSave. Under pressure from her husband and extended family to “take care of the problem”, she is hoping for a way to save her child.  GenderSave gives prenatal, birthing and postnatal assistance to these mothers in return for their agreement not to kill the baby but to leave her with the GenderSave orphan care facility.  In this way, another girl who would have died is rescued, another life has been spared.

Now we ask you to continue the process of giving life to Manisha and the many girls like her by your support in prayer and by financial contribution for food, medicine, clothing and education. Every donation given means another girl like Manisha has a chance to live.  Give Life.  Manisha will thank you.

Get Our Email Updates